OPENING WORLDS OF LEARNING FOR A TRAPPED GENERATION

Many Middle Eastern youth feel hopeless or trapped. Without quality education or job opportunities, personal growth can seem impossible. But as viewers follow the exciting story in Talking Heads, an innovative new cartoon, they will learn to see their own great potential – while also receiving a rounded education.

Fayeq is a young man at a crossroads. He is aimless, directionless, and without much hope for the future. His education seems to have left him ill-equipped for the world of work.

Will Fayeq give in to despair? Or will he look inside – and see his true value.

At risk of losing hope

Fayeq’s situation is one that millions of youth in the Middle East and North Africa (MENA) will understand. With one third of 15-17-year-olds out of school and average youth unemployment at 30 percent, aspirations across the region are being dashed.

There is just one crucial difference between 16-year-old Fayeq and the viewers who will watch him on Talking Heads. This teenager lives one hundred years – and several great technological leaps – in the future.

With Fayeq’s story, told through beautifully-rendered animation, SAT-7 KIDS will show young viewers that no matter their situation, change is possible. They can learn. They can grow.

“The show is educational in a fun and new way,” explains George Makeen, SAT-7 Arabic Channels Programming Director. “It shows how learning can make you more confident and more open to the world.”

And, as their mindset begins to change, viewers of this SAT-7 ACADEMY-branded show will also fill in some of the gaps in their knowledge of science, technology, and the arts.

When we first meet Fayeq, he has not only missed out on education – he is also in sore need of love and guidance. He is sent to live with his distant relative Dr Farghali, a prominent, impatient scientist, but their relationship does not begin well.

The teen is assigned the lowliest tasks at the research facility Dr Farghali runs, the Museum of Top Human Brains. But as Fayeq works, he is able to talk to the museum’s inhabitants – the living, breathing heads of great scientists and thinkers from centuries past.

Mozart. Marie Curie. Avicenna. Einstein. In each episode of Talking Heads, Fayeq talks through his daily problems with these great names and listens as they dialogue with each other. The “heads” each share how they made their discoveries or developed their inventions, putting their work into its context and place in history.

As Fayeq learns about the scientists’ work and lives, he begins to grow as a person. 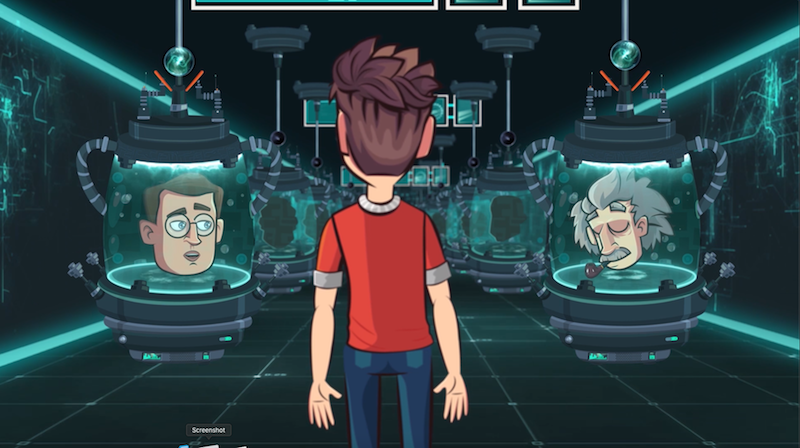 100 years from now, young Fayeq learns from the “heads” of the scientific world, including Tim Berners Lee and Einstein

“This is educating for change, for character building,” says Makeen. “Fayeq learns a lot from these ‘heads’ – he learns he can find meaning in life.”

As they watch, youngsters will learn along with Fayeq about the challenges the scientists faced and how they overcome them. The show will also promote tolerance, by spotlighting scientists from many different backgrounds and how each one’s work built on that of others.

By broadening viewers’ education and helping them develop a growth mindset, Talking Heads will help give young people – and the region they will inherit – a brighter future.

The show, produced by Arascope, is the latest addition to SAT-7 ACADEMY’s high-quality line-up of educational shows for young people. Those who missed out on schooling can also benefit from My School, the brand’s primary education program.

“I’m now twenty-seven years old, and two years ago I didn’t know any English. Now, thanks to you, I can speak and read in English!”